This is a guest post from a close friend of mine.  After I mentioned doing something on the parks to him earlier in the year, wrote one up on one of the parks near him.  I have not been to this particular park, and I wanted to get some parks outside the western US for my east coast readers.  Enjoy!

Jeff has been badgering me for a couple months now to do a blog post for his National Parks series. While sitting at work on a Sunday afternoon, working on a proposal that’s due on Tuesday, I decided I need a bit of a break from the technical writing. (Authors note: It took an additional month and a half to finish this post, but we won the contract! Also, look for another blog post in the coming months on my trip to St. John National Park.)

Living just outside of Washington, D.C., there’s a number of directions to take for finding respite from the city. To the east and south, the beaches await. To the north, cooler temperatures in the Pennsylvania mountains of my youth. My favorite place for a quick (and relatively inexpensive) recreational experience, is located to the west in Shenandoah National Park.

Authorized in 1926 and in operation by 1935, SNP falls completely within the boundary of the Commonwealth of Virginia. Stretching from the town of Front Royal in the north, to I-64 on the south, the park encompasses the foothills and highest elevations of the Blue Ridge Mountains. Running down the center of the park is the Park’s most popular attraction, Skyline Drive. From end-to-end, it provides 105 miles of access to side-trails that lead to waterfalls, meadows, and mountain summits. For the motorcyclist like me, its one of the finest roads in Virginia, if not the entire East Coast. You’re limited to 35 MPH, but that is fine for enjoying the twists and elevation changes as you seemingly leap from peak to peak, to be rewarded with fantastic views of the Virginia Piedmont to the east and the Shenandoah Valley to the West. South of Interstate 64, Skyline Drive becomes the Blue Ridge Parkway, which really seems to have been designed for motorcyles, with plenty of big, sweeping curves that let you put in a good lean while maintaing speed. For the bicyclists, it’s also a great road with plenty of grades of varying steepness. Definitely not for the faint of heart!

Anyway, enough with Skyline Drive. How about the places you can stop and get off the beaten path?

Old Rag, at 3,284 feet above sea level, isn’t the biggest mountain on the East Coast, but it is one of the most scenic and challenging mountains that I’ve encountered. An exposed granite batholith, Old Rag is approximately 400 million years in the making, and time has done wonders. The standard circuit trail up the mountain and back down the Weakley Hollow Fire Road is 7.1 miles and takes about 6 hours. Along the way, you’ll encounter some awesome bouldering, akin to what you might find in various locations throughout the West. A very fun climb with great views, it leads to plenty of wide open areas on which to sit and enjoy a picnic lunch. The return by Weakley Hollow is good for letting your muscles unwind and enjoying a nice walk alongside a small stream. Expect to pay usage fees of around $5 per person, depending upon your entrance point into the park. 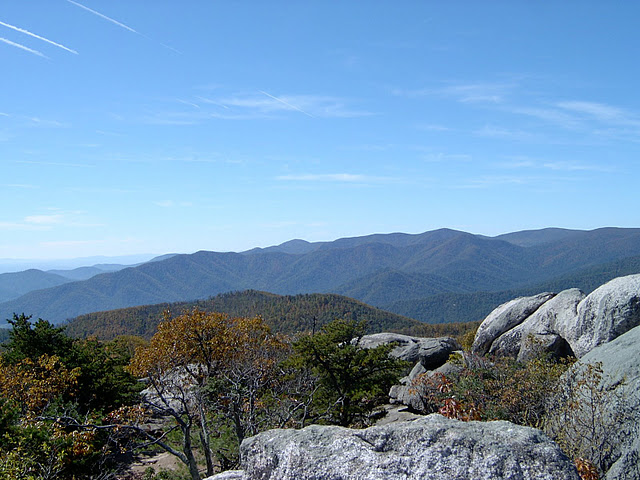 View of the Blue Ridge from the shoulder of Old Rag. 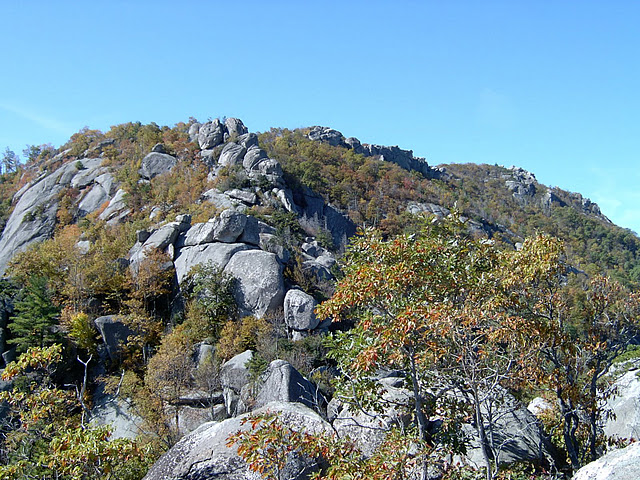 A view of the boulder-strewn terrain that must be navigated to reach the peak, upper center right.

Now, listen, almost EVERYONE who has lived in the DC area has been to Old Rag. If you’re into nice secluded hikes where there’s nary a soul on the mountain, this hike’s really not for you. This place is crawling with folks most weekends. Alternatively, go during the weekdays for a better experience, especially a Tuesday or Wednesday.

I recently went with my fiance (at the time) and other friend to visit Whiteoak Canyon. Located between MP 45 and 46 on Skyline Drive, you hike down the mountain stopping to play in the natural waterslides and swimming holes along Whiteoak Canyon. Additionally, access is available from the eastern park boundary via Etlan, VA along Virginia Highway 231. There’s two options for hiking, either an out-and-back up or down Whiteoak, or a full circuit hike using the neabry Cedar Run trail. We did the circuit tail starting from the eastern boundary and it was quite strenuous. The swimming holes were very refreshing though and made for a great day. 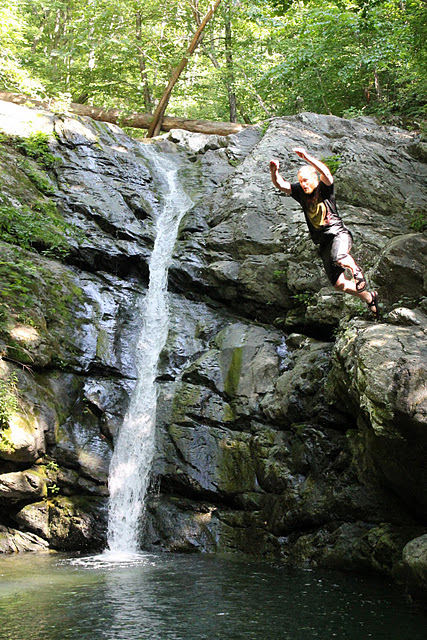 A friend launching into a swimming hole on Cedar Run on a beautiful May afternoon. Yes, it was still cold.

Get great personal finance tips and smart ideas for living a sustainable life.
We use cookies on our website to give you the most relevant experience by remembering your preferences and repeat visits. By clicking “Accept”, you consent to the use of ALL the cookies.
Opt Out.
Cookie SettingsAccept
Manage consent

This website uses cookies to improve your experience while you navigate through the website. Out of these, the cookies that are categorized as necessary are stored on your browser as they are essential for the working of basic functionalities of the website. We also use third-party cookies that help us analyze and understand how you use this website. These cookies will be stored in your browser only with your consent. You also have the option to opt-out of these cookies. But opting out of some of these cookies may affect your browsing experience.
Necessary Always Enabled
Necessary cookies are absolutely essential for the website to function properly. These cookies ensure basic functionalities and security features of the website, anonymously.
Functional
Functional cookies help to perform certain functionalities like sharing the content of the website on social media platforms, collect feedbacks, and other third-party features.
Performance
Performance cookies are used to understand and analyze the key performance indexes of the website which helps in delivering a better user experience for the visitors.
Analytics
Analytical cookies are used to understand how visitors interact with the website. These cookies help provide information on metrics the number of visitors, bounce rate, traffic source, etc.
Advertisement
Advertisement cookies are used to provide visitors with relevant ads and marketing campaigns. These cookies track visitors across websites and collect information to provide customized ads.
Others
Other uncategorized cookies are those that are being analyzed and have not been classified into a category as yet.
SAVE & ACCEPT
Tweet
Share
Share
Pin